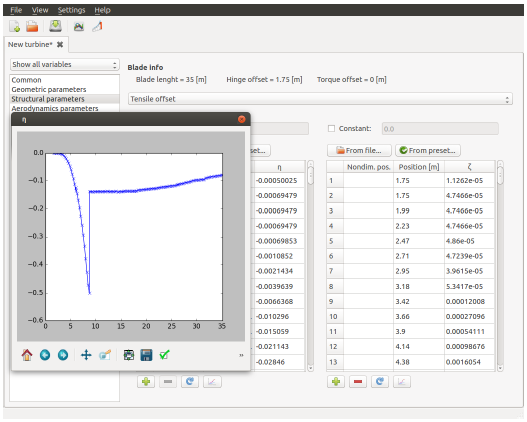 Enhancement of an Aeroelastic Solver for Design Optimization of HAWT

University Roma Tre (hereinafter UR3) Rotorcraft group, on behalf of AirWorks Engineering (hereinafter AW), developed and improved a code for HAWT’s aeroelastic optimization during the period September-2013/June-2014,.
Technical Note to be deliverd to POR-FESR board.
The final goal of the work was the enhancement of the aeroelatic-design
optimization tool developed in the previous years. The aim was to improve both the availability and the quality of the aerodynamic models, of the bladebox modeling, and of the optimization criteria, in order to be more useful and a more direct aid in the preliminary-design phase of HAWT blades layout.
Furthermore, the solver has been given a GUI, currently at its Beta-Version, to be usable from a common user in a friendly way.

UR3 and AW cooperated to assemble such a tool as follows in brief: